Thanks for all the birthday wishes already, you guys! They made me smile when I rolled out of bed this morning. :D I have decided that I still want to be Toph when I grow up. For reals.

Yesterday I went bumming around the Spectacle Island, which is a hilarious feat of human engineering rather than a testament to how amazing nature is. On a hotter day, it probably would have been unbearable wandering around, as there isn't really any shade anywhere, but it wasn't a hotter day, and so it was just really pleasant once I asked the park rangers for sun screen. I also took a really short tour of the North Drumlin with one of the park rangers, and he explained how we were walking on top of an old horse rendering facility/trash heap/leftover dirt from the Big Dig. Which was pretty funny, I gotta say.

Still, the view is gorgeous: 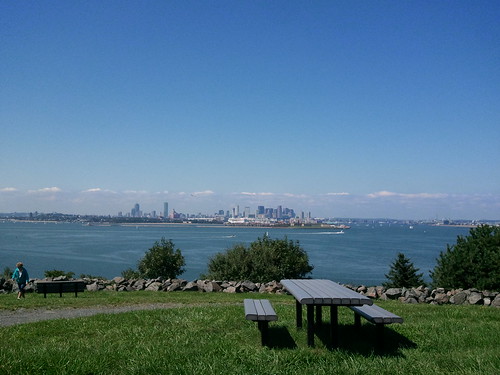 Also, I am reading A Princess of Mars and The Sheik, mostly out of fascination for their proto-ness, in terms of sci-fi/fantasy and romance, respectively. Both are kind of deeply offensive in their own ways, and I have to keep switching between them before killing someone.

This entry was originally posted at http://thedeadparrot.dreamwidth.org/498631.html. You can comment there using OpenID or you can comment here if you prefer. :)